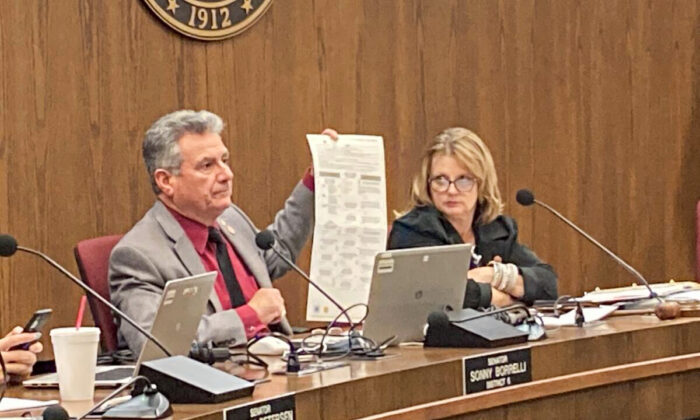 Arizona State Sen. Sonny Borrelli (R) holds up a sample of the current ballot at a hearing of the Arizona Committee on Government in Phoenix on Jan. 24, 2022. Borrelli is lead sponsor of a bill to establish currency-grade ballot security measures. (Allan Stein/The Epoch Times)
Election Integrity
By Gary Bai August 5, 2022

An election official from an Arizona county has resigned after allegations of voter irregularities and a ballot shortage on primary elections day.

Frisk was in charge of ordering the right number of ballots for primary election day, Jeffrey McClure, Chairman of the Pinal County Board of Supervisors, told reporters in a press conference on Wednesday.

“I’m not sure how the ballot shortage happened,” McClure said. “We opened the boxes, and there weren’t enough ballots.”

“As a Board, we are deeply embarrassed and frustrated by the mistakes that have been made in this primary election,” McClure said in a Thursday statement, “and as such, we are taking immediate steps to ensure the November election runs smoothly, as elections in Pinal County have historically done prior to this primary.”

The Arizona primaries on Tuesday included Republican races for the U.S. Senate, U.S. House, secretary of state, the state legislature, and the high-profile gubernatorial race between Kari Lake and Karrin Taylor Robson.

The county said it continued to print ballots and distributed them to the affected polling site during primaries day.

Pinal County Attorney Kent Volkmer during the press conference that approximately 25 precincts, each with a single voting station, out of 95 precincts were affected by the shortage. Volkmer added that about 750 out of 50,000 voters were affected.

When asked if the volume of ballots were sufficient to impact any results of the race, Volkmer said it is a “difficult question,” noting that only 10 votes were used to separate winners in some municipal races.

“There were those people that felt that they were disenfranchised,” Volkmer said. “They were saying, ‘I didn’t get to vote because I had to go somewhere else. We did everything we could. We offered them the ability to wait, as long as they were capable of waiting.”

Volkmer asserted that both Republican and Democratic races were affected, saying the mistake was “widespread” and an “equal opportunity.”

McClure told local media station FOX10 that he had “not seen evidence of a nefarious act,” referring to intentional voter fraud.

The Republican National Committee (RNC) described the ballot shortage—along with numerous other issues—as a “comprehensive failure” that affected “Republican heavy-precincts” across the state.

“At least one voting location was not opened at 6 AM and did not open until 10 AM; there were disabled voting machines not plugged in or with the appropriate paper to use, disenfranchising disabled voters,” the RNC added.

In addition, the RNC noted that 63,000 early mail ballots “were sent to the wrong voters due to a misprint regarding municipal elections” and caused confusion. McClure said during the Wednesday press conference that this error contributed in part to the Election Day shortage of ballots.

“I appreciate that the elections director taking responsibility for these bad ballots that were printed out, but it leaves the voter with very very little confidence in the integrity of the election,” Kelli Ward, chairwoman of the Arizona Republican Party, said in an interview with Lindell TV regarding the erroneous ballots.

“People who shouldn’t have been able to vote in the election were given an opportunity to vote,” Ward said, adding that she’s hearing stories that similar irregularities have been happening in other counties in Arizona as well.

Arizona’s Secretary of State Katie Hobbs, a Democrat, said in a statement in July that her office had completed an “extensive investigation” following the error in the 63,000 early ballots. Hobbs said the state’s voter registration database “did not contribute to the errors on the ballots” and “continues to be secure and reliable for the 2022 Elections.”

Considering all errors leading up to and on Election Day, the RNC noted the importance of having election integrity programs with poll watchers at the ballot box.

“This is a comprehensive failure that disenfranchises Arizonans and exemplifies why Republican-led efforts for transparency at the ballot box are so important,” the RNC said.

Poll watchers—trained in an election integrity program run jointly by the Arizona GOP and the RNC—deployed statewide were able to identify and respond quickly to ballot irregularities on primary elections day, according to the Arizona GOP.

“Because the Republican Party of Arizona and the RNC have built a robust election integrity program, in which we recruited thousands of election volunteers, we were ready to respond as Pinal County’s election debacle unfolded yesterday,” a spokesperson from the Arizona Republican Party told The Epoch Times on Thursday.

“We had hundreds of poll observers deployed statewide, allowing us to quickly identify the issues in Pinal County yesterday—like multiple Republican-heavy precincts running out of GOP ballots or a polling location not opening on time—and elevate them to our team of election attorneys,” the spokesperson continued.

Poll watchers observe the conduct of the election and report irregularities and violations of the Election Code, if any, to election officials. All political parties are allowed to hire election workers to observe all parts of election administration.

The RNC told The Epoch Times that the poll-watching program in Arizona is part of its “multi-million-dollar investment” in its election integrity program for the 2022 cycle.

Its 2022 cycle election integrity program includes hiring “17 state Election Integrity directors, 29 in-state election integrity counsels, and recruiting tens of thousands of poll workers and poll watchers in battleground states across the country,” the RNC said, adding that it spent 2021 cycle consisted of “spending more than $40 million on election protection efforts in battleground states across the country.”

“The RNC’s stance on election integrity is that we should make it easier to vote, and harder to cheat,” the RNC said. “That means ensuring our elections have: Voter ID, absentee signature matching and safeguards, bipartisan observers, updated voter rolls, and timely processing and counting of ballots.”