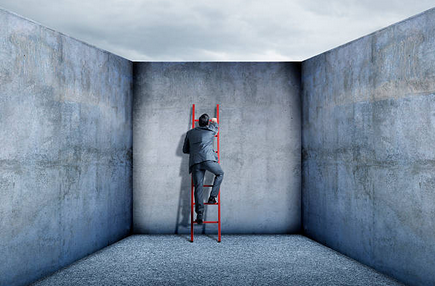 Imposter syndrome is a common psychological phenomenon in which you feel that you’re the only person in the group who doesn’t have it together. You feel you don’t deserve the good things that have come your way. And the more others recognize your achievements, the more you feel like a fake. You’re basically always looking over your shoulder and waiting to be called out as a fraud.

In my research as an executive leadership coach, I have found that 99 percent of all high-achieving individual suffer from some degree of imposter syndrome—that means you and I and many of the people we know all suffer from this syndrome. So how do we escape the trap of the imposter syndrome? It’s largely a matter of five simple steps:

1. Recognize that the syndrome exists. The first thing you have to do is recognize that imposter syndrome actually exists. With acknowledgement comes awareness and with awareness comes the power to manage your own thoughts. Remember, it’s not what you are that holds you back, it’s what you think you are not that keeps you from success. Feeling like an impostor at times is, for many of us, a natural side effect of learning the ropes and gaining expertise.

2. Acknowledge your capabilities. Sometimes we get so caught up in what we don’t know that we forget we’re actually more capable and more competent than we think. Our skills are strengths that can take us wherever we go through whatever we do. We just have to acknowledge them, own them and allow them to carry us when we feel insecure and filled with self-doubt.

4. Remember that perfection isn’t real. Recognize that the perfection doesn’t exist— problems will arise and you’ll make mistakes. It’s not perfection but doing your best in your challenges that gives you the confidence you need to feel assured in your achievements. When you expect perfection, you tend to overlook your own strengths. Those who try to appear perfect will eventually mess up, the confident will feel insecure and the informed will second-guess themselves. That’s the nature of an imperfect life.

5. Stop comparing yourself to others. One of the greatest accomplishments in life is learning to resist comparing yourself to others, because that’s a war you can never win. There always will be someone who is smarter, better or even more successful, but that shouldn’t be your concern. The true measure of success comes within yourself. How do you measure up against who you are and what you want to do?

At the end of the day, we must learn to value ourselves, which means we must tell ourselves that we are good enough, smart enough, capable enough. And if we have to learn something new we will, because what we do in life ultimately comes out of who we believe we are.

This year, the Solemnity of the Assumption marks nine years of marriage for my husband and me. When we got engaged, I knew that he had a deep love for Mary, so it didn’t surprise me when he suggested choosing the Assumption as our wedding day. “You know that you will have to do the …

Source: What the Solemnity of the Assumption Teaches Us About Our Vocation

via Why We Can’t Reconvene Now – Saraki, Dogara

https://www.podbean.com/media/player/8qbun-974aaf?from=yiiadmin&skin=2&btn-skin=101&share=1&fonts=Helvetica&auto=0&download=0&rtl=0“The dirty war on the free press must end,” writes CNN. Others would say that the freedom-driven war on the dirty press must continue. And this assertion may be buttressed by the media’s latest move: collusion in the form of a coordinated press attack on President Trump involving more than 100 newspapers. As CNN reported Saturday:

The Boston Globe has been contacting newspaper editorial boards and proposing a “coordinated response” to President Trump’s escalating “enemy of the people” rhetoric.

“We propose to publish an editorial on August 16 on the dangers of the administration’s assault on the press and ask others to commit to publishing their own editorials on the same date,” The Globe said in its pitch to fellow papers.

The effort began just a few days ago.

As of Saturday, “we have more than 100 publications signed up, and I expect that number to grow in the coming days,” Marjorie Pritchard, the Globe’s deputy editorial page editor, told CNN.

The American Society of News Editors, the New England Newspaper and Press Association and other groups have helped her spread the word.

The irony here, unsurprising with the mainstream media’s world being one of both deception and delusion, is that they act as if — and generally believe that — Trump drew first blood. But who gave the president’s first 60 days in office only five percent positive coverage, when Obama’s figure was 42 percent and even G.W. Bush’s was 22 percent (according to Pew Research Center. Video below)?

By the way, the Left will justify this by saying Trump did more negative things; even if you believe this, however, how should you expect your target to react? Should Trump just bend over and say, “Thank you, sir, may I have another?”? It’s human nature to strike back when struck.

Yet the reality is that, love him or hate him, the issue isn’t Trump. It isn’t that he’s calling the media “the enemy of the people.” It’s that the media are acting as that enemy — something I’ve been saying for years.

The media are the people’s conduit of information, and how can Americans make correct decisions regarding what politicians and policies to support if they’re peddled misinformation? As with a computer, it’s garbage in, garbage out.

And how biased are these toxic-waste mind dumpers? As I reported in 2016, “In his 2011 book Left Turn, UCLA political science professor Tim Groseclose quotes ‘a well-known poll in which Washington correspondents declared that they vote Democratic 93 percent to 7 percent,’ writes U.S. News.”

As a result, he says, most reporters write with a liberal filter. “Using objective, social-scientific methods, the filtering prevents us from seeing the world as it actually is. Instead, we see only a distorted version of it. It is as if we see the world through a glass — a glass that magnifies the facts that liberals want us to see and shrinks the facts that conservatives want us to see.”

And this vicious circle sways elections. I continued, “As Groseclose also wrote, ‘Media bias aids Democratic candidates by about 8 to 10 percentage points in a typical election. I find, for instance, that if media bias didn’t exist, John McCain would have defeated Barack Obama 56 percent to 42 percent [in 2008], instead of losing 53-46.’”

Examples of this bias are legion. I provided just a handful in 2016:

• In 2004, famed newsman Dan Rather’s career was ended when it was discovered that he had peddled forged documents purporting to show that President George W. Bush had shirked his Texas Air National Guard duties in the 1960s and 1970s.

• In 2010, there was the JournoList Scandal, involving an online meeting place in which journalists would conspire to slant the news; this proved that not all media bias was unintentional.

• The media happily reported the claim that WWII-era pontiff Pius XII was “Hitler’s Pope.” Yet they just as happily ignored an even bigger story: the 2007 revelation that the allegation was a malicious fabrication promoted by a Soviet disinformation campaign.

• While the media can’t let go of the Catholic Church sex scandal, they ignore the child sex abuse in government schools, a phenomenon a federally funded study found was 100 times the magnitude of the church scandal. In fact, the researchers evaluated a certain time period and discovered that California’s 61 biggest newspapers ran 2,000 stories about the church scandal but only four about the school scandal.

• The media gratuitously report stories of police shootings of black criminal suspects, despite these occurrences having declined 75 percent during the last few decades. Yet while the police not only shoot more whites but, according to studies, are actually more likely to do so, such events are never widely publicized. This lends the illusion that blacks are under assault, creates racial unrest, and has led to the “retaliatory” murder of cops.

• In 2012, NBC heavily doctored George Zimmerman’s 911 call in a manner many describe as malicious, as it did a cut-and-paste job that made him appear bigoted.

Three more examples: Complaining that journalists have dispensed with objectivity in their zeal to destroy Trump (though this presupposes they had objectivity to dispense with), the Los Angeles Times’ Justin Raimondo pointed out in 2016 that the “DNC emails, published by Wikileaks, reveal[ed] a stunning level of collaboration between important media outlets and the Democrats.”

Then, last year, Counterfeit News Network (CNN) figures were caught on hidden camera admitting that while they knew the Trump/Russia collusion story was nonsense, they were pushing it anywayfor ratings (and, no doubt, ideological reasons).

As for current events, the mainstream media are largely refusing to report that Antifa thugs not only became violent Sunday at their D.C. protest, but also carried a banner stating, “It takes a bullet to bash a fash.” At the same time, the media have provided disproportionate coverage for the D.C. “Alt-Right” rally that attracted fewer than 50 people.

In fact, this attempt to obscure the true threat is so serious that NBC refused to report on a Charlottesville attack by Antifa — on its own reporter and news crew.

via Factory of Empathy!

The government has trained Surveillance and Notification Officers in the 17 local government areas of the state.

“I don’t care if I embarrass Nigeria or not. I have the right to keep him here and I will keep him until he reveals his source.” The police is currently detaining reporter Samuel Ogundipe

Source: I don’t care if I embarrass Nigeria, DCP says as he detains Ogundipe