In John 16:8-12 Jesus continues to prepare the disciples for the coming storm. Jesus work won’t end, it will just be handed over to the Holy Spirit. “And when he has come he will convince the world of its sin, and of the availability of God’s goodness, and of deliverance from judgment.” The job of convincing the world that it has a sin problem, and that God is the only answer to that problem continues to this day. It is a pretty simple truth:

There are no other options – no Plan…

via How to keep all the writing advice in perspective

Mark Schiefelbein | AP Photo
Chinese security personnel stand outside the U.S. Embassy, in the background, after a reported blast occurred nearby in Beijing, Thursday, July 26, 2018.

A single attacker detonated a bomb near the U.S. embassy in Beijing on Thursday, an embassy spokesperson told NBC News.

There were no injuries, other than to the bomber, the official and Chinese police said.

“There was an explosion at approximately 1 p.m. today in the public space off the South East corner of the Embassy compound,” the spokesperson told NBC. “According to the Embassy’s Regional Security Officer, there was one individual who detonated a bomb. Other than the bomber, there were no injuries. The local police responded.”

Chinese police said a suspect detonated a firework-like device near the embassy and injured his hand. Police identified the bomber as a 26-year-old man surnamed Jiang from the Inner Mongolia region of the country. Officials did not provide a suspected motive.

The New York Times reported that the blast was heard blocks away in the city. 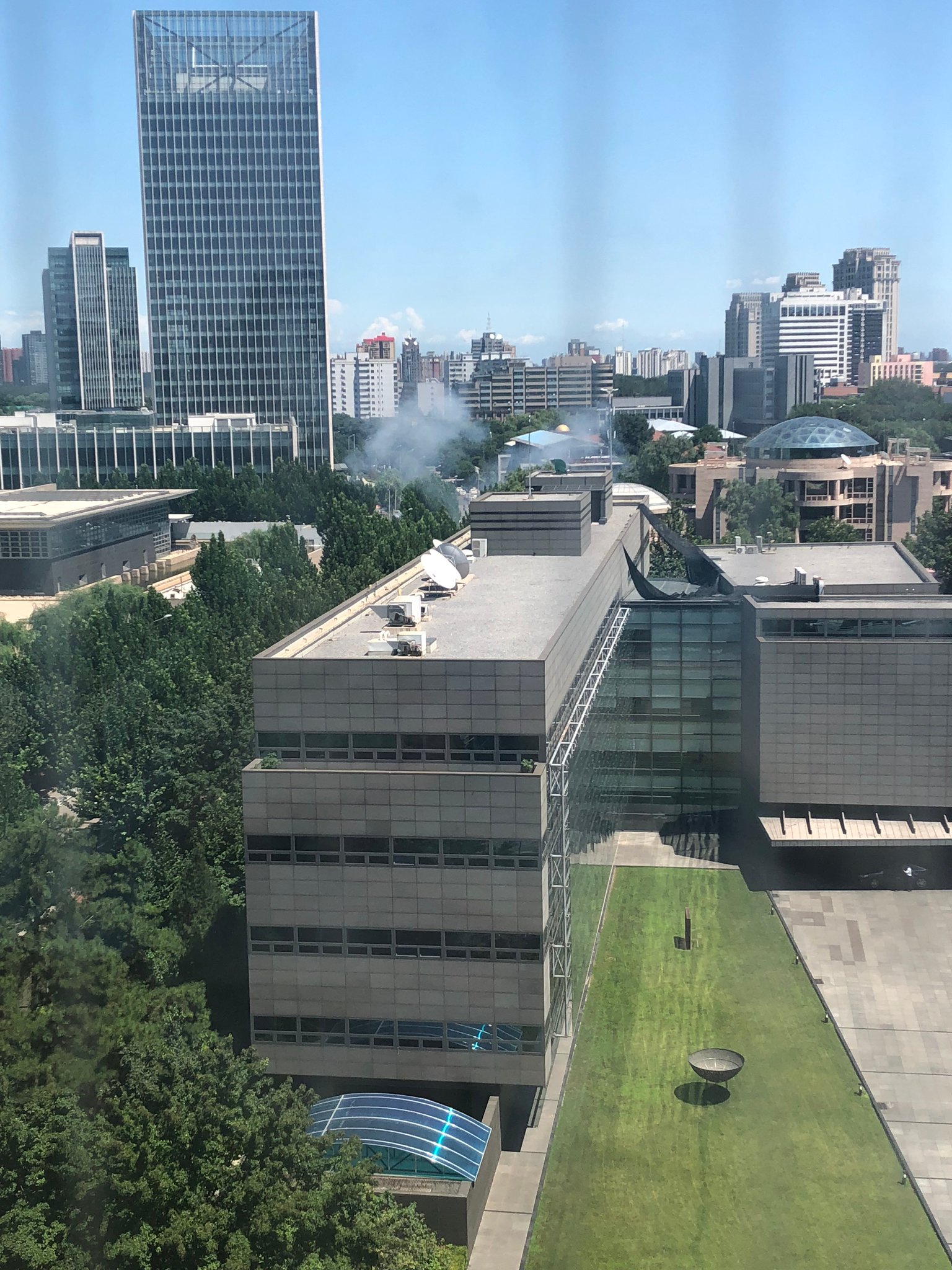 Smoke rises from an apparent bomb detonation outside the U.S. embassy in Beijing. Credit: Gareth Lacey.

Chinese media outlet Global Times reported on Twitter that a witness said police took away a woman “spraying gasoline on herself” outside the embassy around 11 a.m. The state-run outlet said in a subsequent Twitter post that it was not “proved yet” that the incident was connected to the explosion near the embassy that occurred later.

“You do not want to give Jeff Bezos a seven-year head start.”
Hear what else Buffett has to say

Despite that earlier altercation, local media reported that a Foreign Ministry spokesperson said the afternoon’s explosion was an isolated incident.

A witness told Reuters they saw Chinese police examining a vehicle outside the embassy, and another witness said there were seven to eight police vehicles near the embassy and the road next to the complex had been closed off.

Images and videos posted on Twitter showed a large amount of smoke and what appeared to be police vehicles surrounding the vast structure in northeastern Beijing on Thursday afternoon.

Police did not immediately respond to the incident, the Associated Press reported.

The lawmakers said they were responding to a statement credited to Mr Adamu.

Mr Saraki wrote a letter to IGP Idris on Tuesday after the Senate defections.

Source: Offa Robbery: Saraki to IGP Idris: Send your personnel to question me

“As we speak, the situation in the hospital is scary; we receive fresh victims of snakebites every day.’