While questions remain as to whether the Federal Bureau of Investigation had prior knowledge of the Las Vegas shooting, the victim of another terrorist attack on United States soil is speaking out, and attempting to hold the FBI accountable for the suffering he endured.

In May 2015, two men opened fire outside of a provocative “Draw Muhammad” event in Garland, Texas. While the suspects were ultimately the only casualties, the attack is notable in that it became the first ISIS-claimed attack on American soil. It is also notable, because of the close proximity between an FBI agent and one of the suspects—both before and during the attack.

Bruce Joiner, a security guard who was shot and wounded after Elton Simpson and Nadir Soofi opened fire outside of the event, is now suing the FBI for $8 million. He has filed a lawsuit claiming that FBI agents “solicited, encouraged, directed and aided members of ISIS in planning and carrying out the May 3 attack.”

As the Washington Examiner noted, if Joiner does not reach a settlement with the Bureau, “the case could shake loose hundreds of documents from both local and federal officials about what happened that day, and could answer the question of why an FBI agent was in a car directly behind the attackers and did nothing as the events unfolded.”

Simpson gained the FBI’s attention a few years before the attack, as a Muslim who they saw as vulnerable to radicalization. In fact, FBI agents were reportedly monitoring him in the weeks leading up to the attack, and there was even an agent in a car following him to the scene, who did nothing to prevent the crime.

According to a report from CBS News, court records revealed that the FBI agent who was in the car directly behind Simpson and Soofi during the attack had “texted Simpson just weeks before with the message, ‘Tear up Texas,’” and he was even “taking pictures of the car about 30 seconds before the first shots were fired.” As soon as the suspects opened fire, the agent fled the scene.

As The Free Thought Project reported, both local law enforcement and the FBI did not respond to warnings from a woman connected to Anonymous, who cautioned that there was going to be an ISIS-inspired attack at the event—just days before it happened.

“The FBI helped the terrorists obtain a weapon that was used in the attack by lifting a hold during a background check, incited the terrorist to attack the Garland event, and even sent an agent to accompany the terrorists as they carried out the attack,” the lawsuit states, according to a report from the Washington Examiner.

The lawsuit also calls out former FBI Director James Comey, claiming that he worked to cover up the Bureau’s prior knowledge of the threat posed by Simpson:

In the aftermath of the attack, former FBI Director James Comey lied to the American people by claiming that Simpson was a needle in a haystack’ that was ‘invisible to us.’ Even after it had come to light that an undercover FBI agent had been communicating extensively with the terrorists during the week prior to the event and had accompanied them as they carried out the attack, the FBI continued to assert that ‘[t]here was no advance knowledge of a plot to attack the cartoon drawing contest.’

The issues alleged in the lawsuit could be explosive if the FBI is forced to acknowledge and respond. In addition to the accusation that the Bureau’s agents encouraged and directed the attack, the claim that the agents lifted a hold during a background check, in order to help Simpson and Soofi obtain the firearms used in the attack, is incredibly important. It is a reminder that even if gun control measures requiring strict background checks become law, the FBI has the power to bypass them, in order to serve their agenda.

As WikiLeaks founder Julian Assange recently noted, “Almost all ‘terror’ plots are created by the FBI as part of its business model.” While his comments were in reference to the Las Vegas shooting, the underlying principle applies to a number of both foiled and deadly attacks. 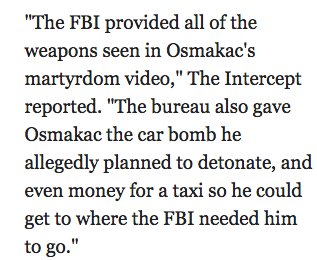 Almost all “terror” plots are created by the FBI as part of its business model.

What is the business of the FBI? Extracting tax. What does it need to do that? A stable threat. Prob? Real terrorists are sporadic & make FBI look weak. Solution? Make them.http://uk.businessinsider.com/fbi-is-manufacturing-terrorism-cases-2016-6?r=US&IR=T …

Source: US Withdraws from UNESCO

Da Vinci Code Author Back—this time to Disappear God, Globalists who work to lead the masses away from their Creator are a dime a dozen

Revealed: Sound of the ‘sonic attack’ on Americans in Cuba

US cuts embassy staff in Cuba after ‘sonic attacks’ on diplomats

WASHINGTON — It sounds sort of like a mass of crickets. But not quite. A high-pitched whine, but from what? It seems to undulate, even writhe. Listen closely: Some hear multiple, distinct tones colliding in a nails-on-a-chalkboard effect.

The Associated Press has obtained a recording of what some US Embassy workers heard in Havana, part of the series of unnerving incidents later deemed to be deliberate attacks. The recording, released Thursday by the AP, is the first disseminated publicly of the many taken in Cuba of sounds that led investigators initially to suspect a sonic weapon.

The recordings from Havana have been sent for analysis to the US Navy, which has advanced capabilities for analyzing acoustic signals, and to the intelligence services, the AP has learned. But the recordings have not significantly advanced US knowledge about what is harming diplomats. Officials say the government still doesn’t know what is responsible for injuries to its personnel, but the US has faulted Cuba for failing to protect American diplomats on its soil.

The Navy and the State Department did not respond to requests for comment on the recording. Cuba has denied involvement in or knowledge of the attacks.

Not all Americans injured in Cuba heard sounds. Of those who did, it’s not clear they heard precisely the same thing.

Yet the AP has reviewed several recordings from Havana taken under different circumstances, and all have variations of the same high-pitched sound. Individuals who have heard the noise in Havana confirm the recordings are generally consistent with what they heard.

“That’s the sound,” one of them said.

The recording being released by the AP has been digitally enhanced to increase volume and reduce background noise, but has not been otherwise altered.

The sound seemed to manifest in pulses of varying lengths — seven seconds, 12 seconds, two seconds — with some sustained periods of several minutes or more. Then there would be silence for a second, or 13 seconds, or four seconds, before the sound abruptly started again.

Whether there’s a direct relationship between the sound and the physical damage suffered by the victims is unclear. The US says that in general, the attacks caused hearing, cognitive, visual, balance, sleep and other problems.

A closer examination of one recording reveals it’s not just a single sound. Roughly 20 or more different frequencies, or pitches, are embedded in it, the AP discovered using a spectrum analyzer, which measures a signal’s frequency and amplitude.

To the ear, the multiple frequencies can sound a bit like dissonant keys on a piano being struck all at once. Plotted on a graph, the Havana sound forms a series of “peaks” that jump up from a baseline, like spikes or fingers on a hand.

“What it is telling us is the sound is located between about 7,000 kHz and 8,000 kHz. There are about 20 peaks, and they seem to be equally spaced. All these peaks correspond to a different frequency,” said Kausik Sarkar, an acoustics expert and engineering professor at George Washington University who reviewed the recording with the AP.

Those frequencies might be only part of the picture. Conventional recording devices and tools to measure sound may not pick up very high or low frequencies, such as those above or below what the human ear can hear. Investigators have explored whether infrasound or ultrasound might be at play in the Havana attacks.

The recordings have been played for workers at the US Embassy to teach them what to listen for, said several individuals with knowledge of the situation in Havana. Some embassy employees have also been given recording devices to turn on if they hear the sounds. The individuals weren’t authorized to discuss the situation publicly and demanded anonymity.

Cuban officials wouldn’t say whether the US has shared the recordings with Cuba’s government.

Another big question remains: Even if you know you’re under attack, what do you do? Still dumbfounded by what’s causing this, the United States has been at a loss to offer advice.

Mysterious Soviet buoy washes up on Florida shore after Irma

US orders expulsion of 15 Cuban diplomats

US to ask Cuba to cut embassy staff by 60 percent

The embassy’s security officials have told staff if they believe they’re being attacked, they should get up and move to a different location, because the attack is unlikely to be able to follow them, the commenting individuals said. The AP reported last month that some people experienced attacks or heard sounds that were narrowly confined to a room or parts of a room.

At least 22 Americans are “medically confirmed” to have been affected, the State Department says, adding that the number could grow. The attacks started last year and are considered “ongoing,” with an incident reported as recently as late August.

Cuba has defended its “exhaustive and priority” response, emphasizing its eagerness to assist the US investigation. Cuban officials did not respond to requests for comment for this story but have complained in the past that Washington refuses to share information they say they need to fully investigate, such as medical records, technical data and timely notification of attacks.

The recordings also appear to rule out one possibility for a high-tech weapon: electromagnetic pulses.

The broad array of symptoms reported, including those not easily explained by sound waves, had led to questions of a possible microwave or radio wave device frying body tissue from afar. Research conducted by the US military decades ago showed that short, intense “pulses” of microwaves could affect tissue in the head in a way that was interpreted by the ear as sound, meaning that a microwave device could potentially “beam” sounds directly into people’s heads.

If that were the case, the sounds wouldn’t show up on a recording.

Curtain Down On Las Vegas Shooting Paul Craig Roberts Dear Readers, I appreciate all of your supportive comments about my efforts to tell the real from the